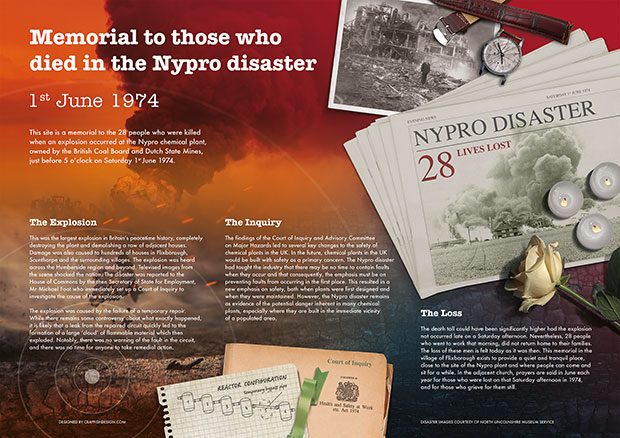 Memorial to those died in the Nypro disaster, 1st June 1974.

This site is a memorial to the 28 people who were killed when an explosion occurred at the Nypro chemical plant, owned by the British Coal Board and Dutch State Mines, just before 5 o’clock on Saturday 1st June 1974. This was the largest explosion in Britain’s peacetime history, completely destroying the plant and demolishing a row of adjacent houses. Damage was also caused to hundreds of houses in Flixborough, Scunthorpe and the surrounding villages. The explosion was heard across the Humberside region and beyond.

Crayfish Design were asked by the Flixborough Parish to create a single A1 sized interpretation panel to be part of the Nypro memorial at local All Saints’ church.

The design needed to illustrate the dramatic event, but also be sympathetic in its approach to the community. We wanted to give an indication of the scale and devastation caused by the explosion without sensationalizing the event and so created a muted background scene on which we could build a story.

To achieve this we utilise a few photographs from the media at the time and worked them into a scheme, combining factual reporting objects such as newspapers and government inquiry reports together with those of human emotion and remembrance with candles and flowers. The supplied images were quite small for a panel of this size, so this compositing approach allowed them to be used at a scale in keeping with the objects.

Details were added such as the time of the explosion shown on shattered watch face and a sketch of the chemical plant process showing the suspected cause of the explosion. In addition, the design used a combination of colour and typography reflecting the 70’s style of the time.

With the format being an A1 lectern, we composed most of the smaller text towards the bottom half to aid legibility and access.

The theme and subsequent designs incorporated:

“The memorial to the Nypro Explosion in 1974 is situated outside All Saints’ Church, Flixborough. The memorial consists of a pond, around which are some birch trees, and a name plaque containing the names of the 28 people who died in the explosion. It was felt that we needed an Information Board to explain to today’s generation, the reason and purpose of the memorial. We gave Crayfish a set of ideas which focused on the key facts of the disaster and the text we wanted on the board; Crayfish did the rest.

Crayfish Design did an amazing job in producing the artwork for the Information Board. The result was a piece of art that should really be in the Louvre but is instead, now part of the Nypro memorial. It is clear that the artwork must have taken many hours to complete; it must have been a ‘labour of love’ for those who worked on it. The Information Board now enables the Nypro memorial to be meaningful to today’s generation; helping to fulfil the hopes of those who recall the disaster, that neither the disaster nor those who died in it, should ever be forgotten.”

Crayfish were very helpful, working closely with us to design and produce an eye-catching stand and stylish brochures.